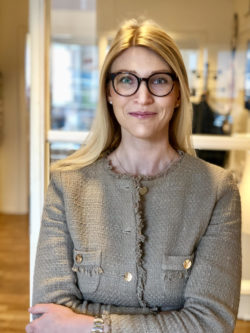 Since 2016 Anna Dalgaard has been a Member of the Board of Directors in HemCheck – last Monday she was elected chairman.
– HemCheck is at an exciting stage, and I look forward to being part of guiding the company in this phase.

Anna has nearly 15 years experience from the health care industry. She has worked as a management consultant, an entrepreneur, and a business developer in national as well as international corporations.
– I was planning on becoming a doctor, but I ended up studying at the Stockholm School of Economics instead. When I had finished my graduate studies, I joined McKinsey &amp; Co and became involved in their health care sector work early on, with engagements in Sweden, Denmark, England, Switzerland and the Middle East, says Anna. Eight years ago, Anna co-founded a health care company, which rapidly gained success and was divested. Today she works as a professional board member and also invests in smaller health care companies.

What are you looking forward to in this new role?
The company is facing an exciting journey. A lot of hard work has gone into development, testing and evaluation. Now it’s time to launch commercially, and I look forward to being a part of guiding the company in this phase; scaling up, networking and establishing partners. Being the chairman for a publicly listed company is also new to me, and I see it as an opportunity for personal development.

Why have you chosen to work with HemCheck?
I believe in the product and I have gotten to know the team behind it, and apart from being ambitious and competent, they are a fun group to work with.

Something you did not know about me
I was part of a team designing and developing a health care regulator in Bahrain, on assignment by the Court of the Crown Prince in Bahrain.

This website uses cookies to improve your experience while you navigate through the website. Out of these, the cookies that are categorized as necessary are stored on your browser as they are essential for the working of basic functionalities of the website. We also use third-party cookies that help us analyze and understand how you use this website. These cookies will be stored in your browser only with your consent. You also have the option to opt-out of these cookies. But opting out of some of these cookies may affect your browsing experience.
Necessary Always Enabled
Necessary cookies are absolutely essential for the website to function properly. This category only includes cookies that ensures basic functionalities and security features of the website. These cookies do not store any personal information.
Non-necessary
Any cookies that may not be particularly necessary for the website to function and is used specifically to collect user personal data via analytics, ads, other embedded contents are termed as non-necessary cookies. It is mandatory to procure user consent prior to running these cookies on your website.
SAVE & ACCEPT